I remember buying my first bitcoin back when it was still hovering around ~$100. It’s an understatement to say things have sure changed – and, not just in terms of what Bitcoin is now worth (market cap just under $1 trillion), but also with the ecosystem, exchanges, trading/investment vehicles, and flood of other blockchains and respective cryptocurrencies that followed. From the paper that started it all came an avalanche of ideas and innovation embracing fundamental paradigm shifts in how transactions, currency, digital assets, and even applications can be viewed and utilized in a different way. 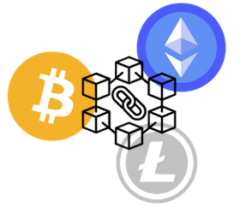 Although I wish I could go back in time and follow-through with plans to sell all my assets and go all-in with Bitcoin, I am still excited for the future and what’s to come from what started with the first implementation of blockchain with Bitcoin to what has now morphed into something larger. In this short post, I talk about the initial use of blockchain with Bitcoin and how it has evolved beyond its initial use for digital money or cryptocurrencies into a platform for decentralized apps (DApps).

In a nutshell —– blockchain is a shared, distributed database that stores data in blocks that are ultimately linked together using cryptography, making verification easy and transparent. A block consists of data and state; the blocks are stored in consecutive groups, and the term ‘chain’ refers to the fact that each block cryptographically references its parent.

I’m going to really simplify here to keep this short and to the point. A core tenant of blockchain is that it is immutable. In other words, a block cannot be changed – attempting to do so would require all other blocks be changed (due to the fact that blocks are chained together – propagating a chain effect and requiring a considerable amount of compute/energy resources). In short, it would be extremely difficult due to the work involved and consensus required from the nodes on the blockchain.

I won’t go into a deep dive on consensus here, but, in short, this is a common term in all blockchains used to convey the fact that the nodes on the P2P blockchain network need to validate and agree on the state of the blockchain. If a node tries to execute a malicious transaction, it will be rejected by the other nodes on the network.

Bitcoin was initially released in 2009 and was actually the first real application of blockchain – the use case being digital money or what is more commonly known as cryptocurrency. Cross border payments or remittances across borders is also a huge use case due to the speed by cutting out the middle man and maintaining low costs. There are plenty more details that can be discussed in regards to blockchain including different types of nodes, mining, and consensus, but the point I want to get across here is that the Bitcoin blockchain was designed for the means of digital money/payments – even Satoshi Nakamoto’s paper says as much per the title – “Bitcoin: A Peer-to-Peer Electronic Cash System.”

Ethereum is a a blockchain that was released in 2013 and builds on the foundation of the Bitcoin blockchain. Vitalik Buterin is the founder of Ethereum, and his original whitepaper can be read here. Ethereum expands the use cases of Bitcoin by allowing for applications termed “Smart Contracts” to be deployed and run on the Ethereum blockchain. Thus, Ethereum is considered a ‘programmable’ blockchain. Since blockchain is based on a P2P network, the application becomes decentralized. Because of the characteristics of blockchain, DApps have some important characteristics as discussed in my prior blog: Web3, DApps, and Cloudflare IPFS and Ethereum Gateways; these characteristics are inherent decentralization, trustlessness, immutability, verification, and transparency.

With decentralization, the traditional server-based model shifts to to a more distributed decentralized model (P2P network). No longer does a central entity have full control of the platform. The transaction is is processed by a node on the blockchain network and all participants independently verify it.

Trustlessness enables moving from explicitly having to trust a central entity to a trustless model where the consensus mechanism ensure behaviors and conditions.

A core aspect of blockchain in the inherent immutability discussed prior to prevent tampering of data/transactions.

Application logic is contained and viewable within the contract and behavior is transparent to the user; execution and result is determined by code without intervention of any entity.

Ether, the native cryptocurrency of Ethereum is second only to Bitcoin in market capitalization, sitting currently at just under $400 billion. You may be wondering where Ether comes into play with DApps on the Ethereum blockchain – well, remember, there is quite a bit of work involved when adding to the blockchain – and this is paid for through Ether!

Today, most DApps are using the Ethereum blockchain, however, other programmable blockchains have since been released. The space continues to evolve with use cases being seen in areas such as payment systems, auditing, gaming, Defi, NFTs, and Decentralized Autonomous Organizations (DAOs). 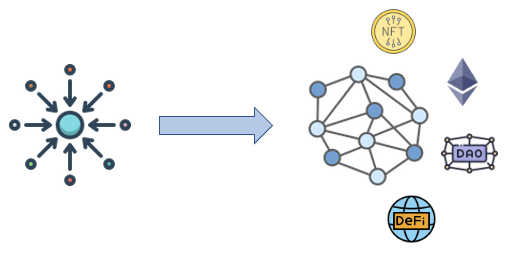 Hopefully, this short post helped provide some insight and garner some interest around the current world of blockchain, cryptocurrencies, and DApps. Stay tuned for my follow-up posts on blockchain and developing DApps!